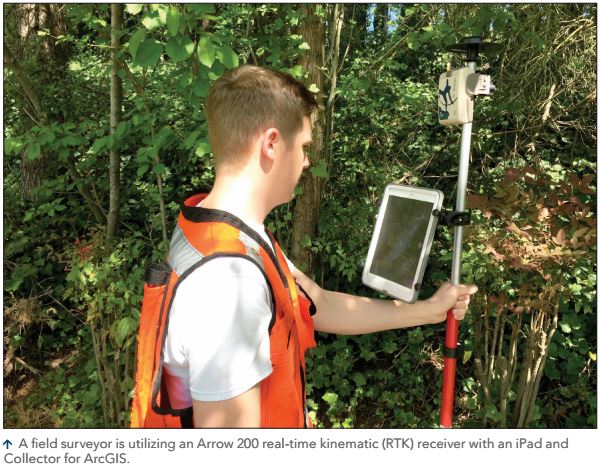 As a former project manager of field surveys, I can attest to these budget and time savings, and I can definitively say that ruggedized iPads paired with Eos Arrow GNSS receivers for mobile GIS workflows make for happier field crews.

This mobile GIS workflow uses a tablet or smartphone running Esri’s ArcGIS Collector software paired with an external Bluetooth GNSS receiver to record new field data viewed on a large screen (with aerial imagery easily available), monitor assets, and even capture photos linked directly to each data point. There is no need for paper data sheets, a digital camera, or a handheld GNSS unit. A mobile GIS system also takes advantage of real-time data transfer from the field for sharing data with coworkers and management via cellular service.

The Missing Piece of Mobile GIS and High-Precision GNSS 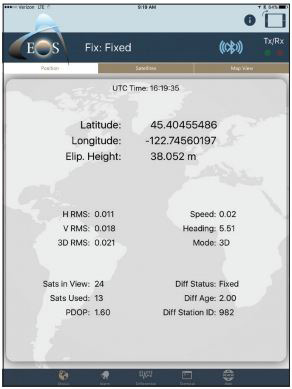 What has been lacking from nearly all mobile GIS apps available today is the ability to record the Bluetooth GNSS receiver’s metadata with each data point collected. Metadata includes everything from the number of satellites used at the time data was electronically collected to the fix type (GPS, DGPS, RTK Fix/Float) and estimated horizontal and vertical accuracies. This location information can be viewed on a mobile device via the GNSS receiver’s proprietary app but not recorded. The typical workflow for field users has been to flip back and forth between the Collector app and the GNSS receiver’s proprietary app to view their estimated accuracy.

Estimated accuracy is important to know, since most fieldwork is required to have accuracy levels ranging from submeter and subfoot to centimeter, depending on whether users are delineating a wetland, trying to locate a buried asset, or recording an as-built pipeline before it is covered over. If their particular work requires recorded estimated accuracy values with each point, then they would have had to handwrite the estimated accuracy displayed in the GNSS receiver’s proprietary app and then flip back to Collector and collect their data.

Thus, when users view their location live on their tablet, they appear to be located on the map at their true location. This is the same default WGS 84 spatial reference system utilized by Collector. RTK users achieve centimeter-level accuracy by swapping the submeter accuracy SBAS (WAAS) satellite corrections with centimeter corrections from an RTK network that is broadcast over the Internet and consumed through cellular service on their smartphone or tablet. These corrections provide RTK GNSS receivers with the needed accuracy but are broadcast in the North American Datum of 1983 (NAD 83 [2011]), and the basemap imagery displayed in Collector is in WGS 84. Thus, the location of the users and their RTK receiver usually appears on screen to be shifted by about four feet.

Collector to the Rescue

This summer, Esri took a much-anticipated leap forward with its release of Collector 10.4. This update added multiple functions for high-precision GNSS surveying:

Users of any high-precision submeter, subfoot, or centimeter accuracy GNSS equipment, such as Eos Arrow or Geneq SXBlue, can now view their estimated accuracies and other satellite metadata live from within Collector. This amazing implementation can save immense amounts of time in the field. This function allows the user to remain inside the Collector app all day and avoid flipping back and forth between Collector and the GNSS receiver’s proprietary app for viewing satellite metadata. The small green box located at the bottom left of the screen shows the GNSS receiver’s estimated horizontal accuracy live. For additional information, the user can tap the green box and view horizontal accuracy, vertical accuracy, fix type, station ID, correction age, the number of satellites, and a correction profile.

Not only does this Collector update allow users to directly connect their Bluetooth GNSS receiver to create a direct line of communication between Collector and the GNSS receiver, it also activates the ability to save the satellite metadata. This is a much-needed addition to the mobile GIS workflow.

With Collector, data collection forms can now be set up to automatically record the positional metadata with each recorded data point.

Users of submeter GNSS receivers can apply a correction profile to create a datum transformation that will allow their WGS 84 satellite coordinates to be saved in their preferred datum. Thus, users that work with their data in NAD 83 can set their location coordinates inside Collector to be automatically saved in NAD 83 format without having to apply the datum shift back in the office from WGS 84 field-collected data to NAD 83 for use in their GIS.

For RTK users, the new Collector release also includes the ability to set a correction profile to adjust basemap imagery. This allows the user to inform Collector which datum is coming from the GNSS receiver. For example, applying a NAD 83 (2011) datum correction will shift the map imagery to line up with the corrections via the RTK network. This eliminates the usual four-foot shift and shows the user’s location on the map to be in the same location as they are in the real world.

In conclusion, the iOS update for Collector 10.4 is an amazing advance toward incorporating high-precision GNSS equipment and data into a mobile GIS workflow. 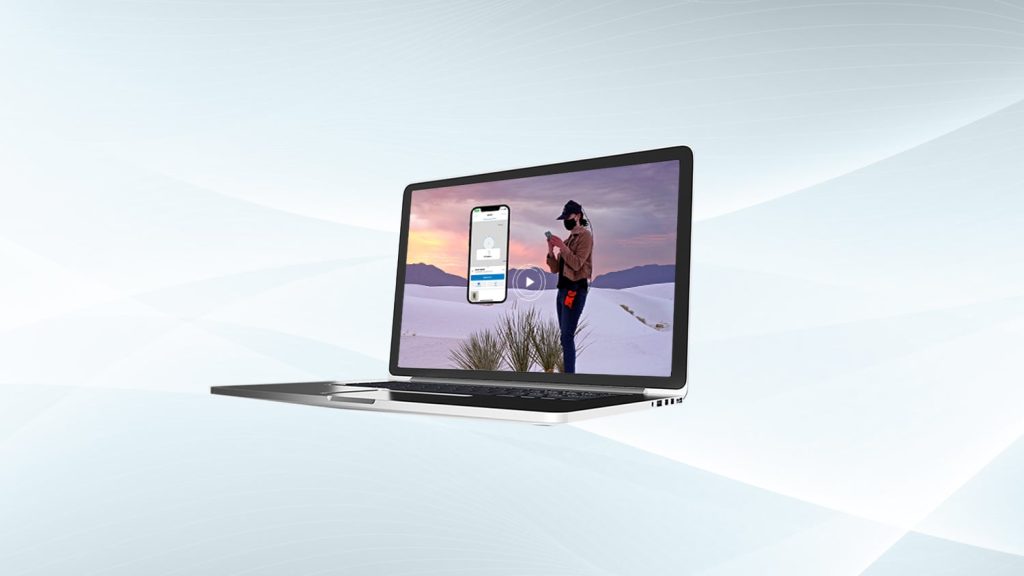 Eos is pleased to offer a free training workshop for those who wish to use Arrow GNSS receivers with Esri’s ArcGIS Field Maps. Request the recording here. 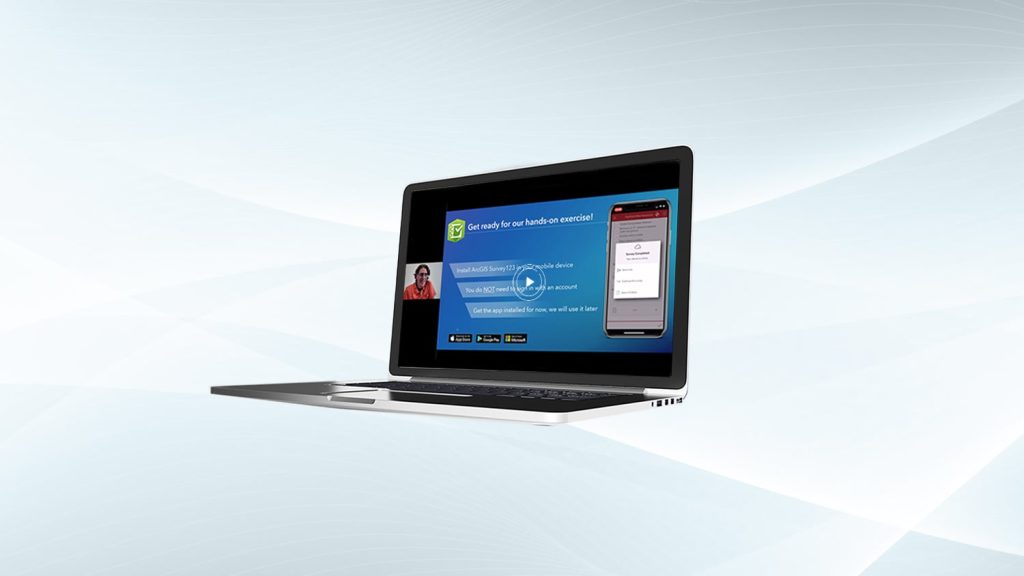 Read more
Categories: Articles, Datum Shifts, GIS, ArcGIS Collector
We use cookies to ensure that we give you the best experience on our website. Proceeding with use of this site indicates your consent.Ok