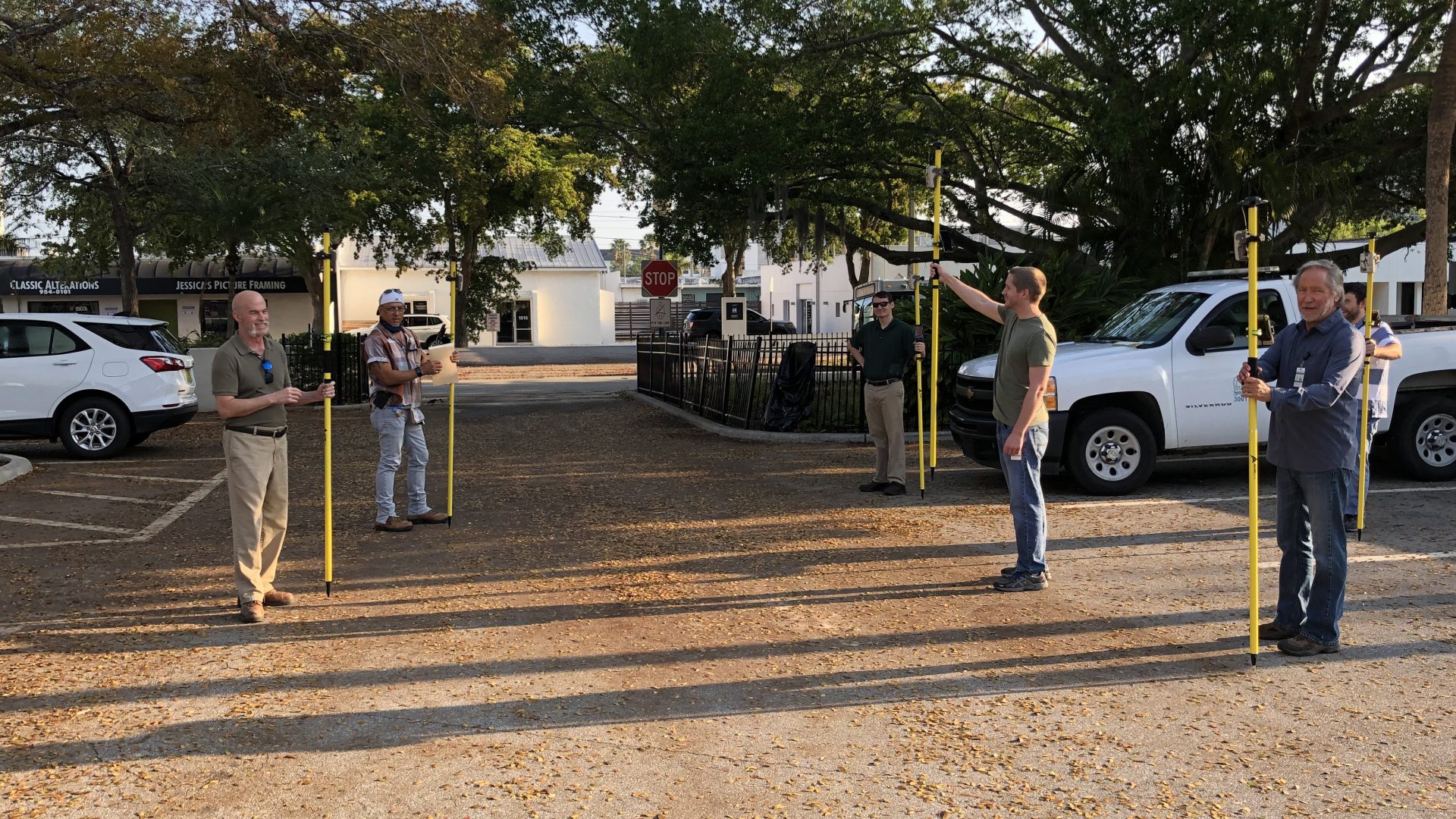 Note: This story was originally published by Esri. View the original article here.

A parking enforcement officer and a city clerk were among the city employees who took part in an innovative GIS data collection project in Sarasota, Florida, after being sidelined from some of their regular tasks due to the coronavirus disease 2019 (COVID-19) pandemic. The employees learned how to collect data on streetlights, road signs, and other assets by using mobile GIS apps and high-accuracy Global Navigation Satellite System (GNSS) receivers.

Not only did the project keep city staff productive after the amount of their workloads decreased, but also it is expected to drive significant value to the city’s GIS initiative while reducing third-party data-collection costs.

The city of Sarasota, located on Florida’s Gulf Coast, is home to nearly 60,000 full-time residents. However, the population almost doubles each winter, keeping city employees even busier than usual. But then the pandemic began, and city offices and many activities shut down, leaving some time freed up for employees to focus on a city asset data collection project using GIS and GPS technology.

Sarasota is located on Florida’s Gulf coast, south of Tampa.
Five years ago, the city hired Herminio Rodriguez as director of information technology (IT). The city tasked him with rebuilding an IT department from scratch, complete with an enterprise GIS.

“We want to be able to make data-driven decisions, and GIS is a big component of that,” Rodriguez said. “I would just say there are probably very few things you cannot do with GIS. A robust and accurately updated GIS database is the key in making . . . decisions.”

Last year, Rodriguez hired GIS coordinator William Rockwell to rebuild the city’s GIS and update its data, taking advantage of the city’s enterprise agreement (EA) with Esri. In the past, Sarasota had outsourced its GIS data collection, but the data was never reliable and was now outdated. Rodriguez and Rockwell determined that they would need to either update or re-create all of the city’s information assets. They estimated the costs to be in the hundreds of thousands of dollars in outsourced labor over the course of at least five years.

Pandemic Frees Up Time for Some Municipal Staff

As COVID-19 cases began to be documented in Florida early last March, the City of Sarasota began locking down its municipal buildings. One by one, local businesses also closed. City employees found their daily workloads diminishing, which left some staff members either idle some or all of the time. City manager Tom Barwin sent out a notice to all departments, asking for creative ways to productively occupy these workers.

“The city manager was discussing roles in the city,” Rodriguez said. “He asked us to think outside the box for what we could do to create new projects.”

Rockwell, who had only been with the city for a short period, proposed that these underused workers collect accurate location and attribute data about the city’s much-needed assets. This would speed the existing five-year plan to rebuild the GIS and reduce the high cost of outsourcing the work.

Rockwell and Rodriguez ran a funding exercise to determine the project costs. Because the city had an existing EA with Esri, there would be no need to pay additional money for GIS software.

“We were happy the city could utilize its full field-to-office ArcGIS platform during the coronavirus outbreak,” said Ben McCrary, a member of Esri’s global business development team. “Not only were staff able to introduce GIS to people who had never used it, but they could do so instantly, without any changes to their software budget.”

The city also had a box of extra iPhones, left over from a service-provider migration, that could be turned into offline data-collection devices. The only cost would be for professional-grade GPS receivers to enhance the iPhones’ accuracy.

“The financial commitment was small from the city, but the return [on investment] was huge,” Rodriguez said. “We could start capturing this massive amount of data that we really need.”

One of the first tasks was to prioritize which assets to collect data on during the project. Rockwell met with city subject-matter experts and decided to focus on asset types whose data could be collected within 30 days. The time set aside for the project was later extended an additional 30 days.

The team made collecting data on 6,000 city streetlights a priority because of the numerous requests for information from outside organizations, such as Florida Power and Light (FPL) and the Florida Department of Transportation (FDOT). Road signs would be easy to map concurrently, so team members added that inventory to the first stage of the campaign. Mapping city trees would come in a subsequent phase.

“Everyone agreed it would be better to [first] undertake mapping campaigns that could be completed [quickly],” Rodriguez said. “We decided streetlights would be the first assets we could tackle in order to better answer requests for information.”

Using ArcGIS Collector, field workers collected data on both street lights and road signs. They collected feature attributes such as photographs, the type of street light, and the condition of the lights.

Inventorying the trees will take longer. Trees have historically been an important part of Sarasota’s luscious green landscape. Local regulations even dictate rules for residents cutting down or swapping placement of trees, including on private property.

“Just about every city commission meeting includes some kind of tree initiative,” Rodriguez said. “So having an accurate account of our trees is important.”

City Staff Learns to Use GPS and GIS while Social Distancing

“We’re collecting a lot of high-quality data,” Rockwell said. “This same work would have otherwise cost us hundreds of thousands of dollars if we had outsourced it.”

Rockwell chose ArcGIS Collector (formerly Collector for ArcGIS) as the data collection app of choice. The app, included in the city’s Esri EA, offers a variety of helpful features. It works in an offline mode and in disconnected environments. This gave staff the ability to use the city’s legacy iPhones and simply sync their collected data at the end of each day via Wi-Fi. ArcGIS Collector also enabled Rockwell to set a three-foot accuracy threshold to ensure that the asset location data was correct.

Field workers took pictures of assets with the iPhones and, at the same time, updated existing data rather than collect it from scratch.

They used ArcGIS Collector to gather information on the streetlights and road signs, including the type and condition of each light or sign. They also photographed them.

Rockwell emphasized the importance of photographing each streetlight so that the entire fixture would show and capturing both the front and back of each sign. The iPhone cameras shot high-quality pictures under normal daylight conditions.

A description field in Collector allowed the workers to input sign descriptions, such as “Stop” and “One Way left.” Asset conditions were especially important because they would be used later to determine which lights had reached the end of their life cycle.

“Up until now, we didn’t know how many we needed to replace, because of poor data,” Rockwell said. “Having a condition domain drop-down [menu] in addition to a photo is going to shape our streetlight replacement program in upcoming years.”

For GPS receivers, Rockwell contacted the city’s GPS vendor for a recommendation. The vendor expedited a shipment of 14 Arrow 100® GNSS receivers, manufactured by Esri partner Eos Positioning Systems. The Arrow 100® connects seamlessly with ArcGIS Collector on iOS to provide submeter accuracy and performs uniquely well even under the dense tree canopy in Sarasota.

Rockwell set up the 14 data collection kits in his living room at home. Each kit consisted of an iPhone loaded with ArcGIS Collector, the city’s mobile device manager (MDM) software for security, a range pole, and the Arrow 100® GNSS receiver. The next day, Rockwell met five city employees at the city hall parking lot for the first group training.

Trainees followed social distancing guidelines, staying approximately six feet apart from each other while Rockwell taught them how to use ArcGIS Collector and the Arrow 100® GNSS receivers.

Rockwell explained the basic concepts of data collection using the high-accuracy Arrow receivers and the ArcGIS Collector app. During the training session, employees took turns collecting sample data so that Rockwell could address any initial concerns. The employees saw how, under perfect satellite-visibility conditions, accuracy with the Arrow 100® was as good as seven inches, though under moderate canopy density, the team achieved an average of 2.5 foot (or 0.8-meter) accuracy.

Rockwell handed out reflective vests, printed maps, and markers. The printed map series, created in ArcGIS Pro, consisted of 28 full or partial grids of the city. This allowed the newly improvised data collection crew—most of them unfamiliar with GIS—to easily mark off where they had collected data each day.

“Some of the older-school employees prefer to keep track on paper what they map each day,” Rockwell said. “Once they’re done, they text or call me, and I can give them a new quarter section to take on.”

At the end of each day, after the workers synced their data to ArcGIS Online, Rockwell assessed the team’s progress and checked for errors. He worked to make sure that data was being collected according to the project standards, such as ensuring that each data point had a quality photo attached to it.

“I try to help out wherever I can,” Cooney said. “It’s nice that I have a project that gets me out and walking around, especially now that I’m working from home and socializing less.”

Employees and Residents Get a Boost in a Tough Time

The City of Sarasota is now accelerating its planned GIS database improvements and keeping city staff from becoming idle during the pandemic.

“We’re collecting a lot of high-quality data,” Rockwell said. “This same work would have otherwise cost us hundreds of thousands of dollars if we had outsourced it.”

Other departments have also requested data collection if time allows. For instance, one proposal is to map the city’s parking meters—data that was previously collected by manually entering locations into a Google map.

“This would be an opportunity to have an inventory of all parking meters with submeter accuracy and bring that into the GIS world,” Rockwell said.

Overall, response to the project has been overwhelmingly positive.

“I’m thrilled the city is supporting this initiative,” Rodriguez said. “To be able to take employees doing very different jobs and put them in the field—this wouldn’t have been possible in a normal environment. We are excited that everyone is chipping in.” 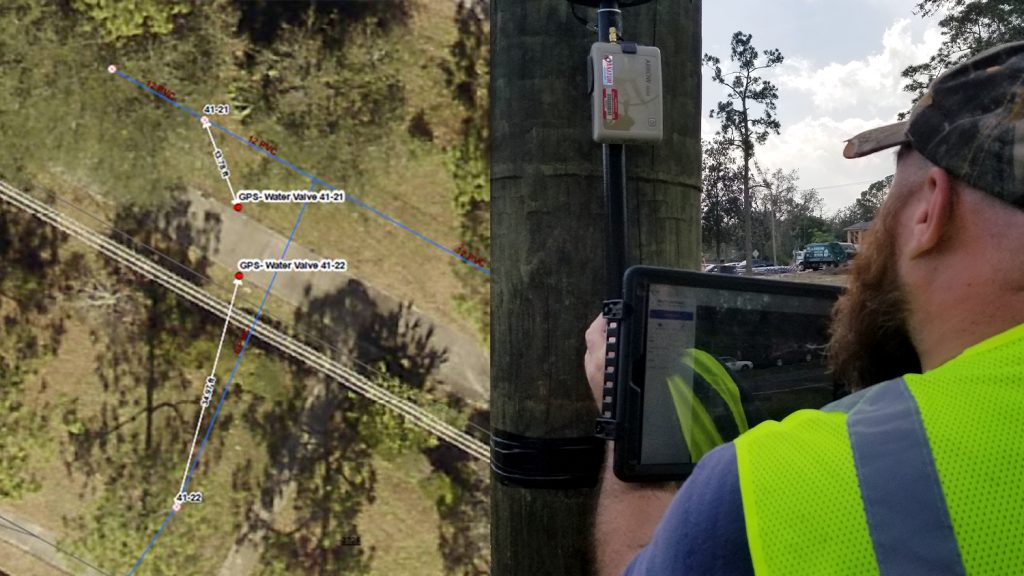 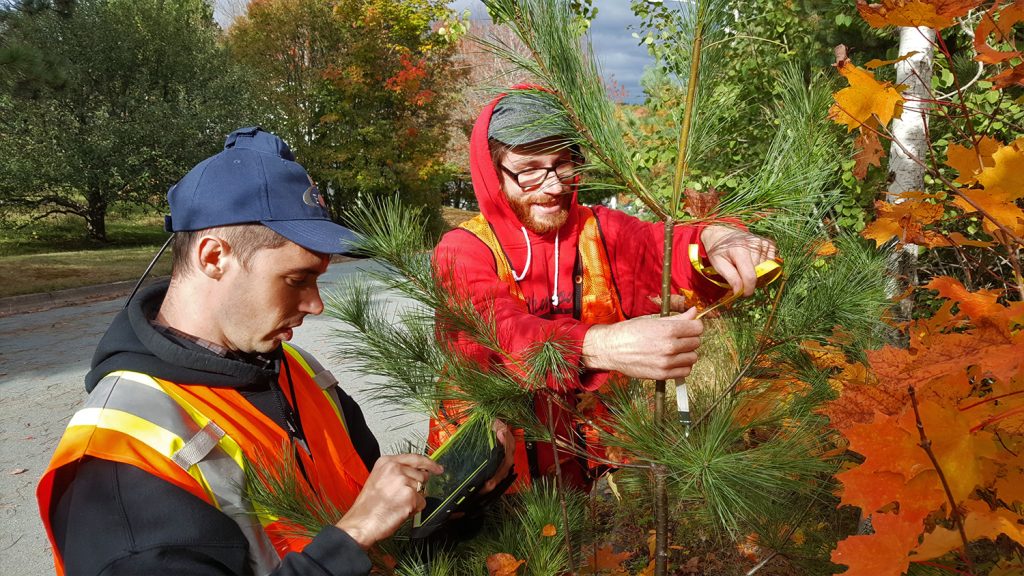