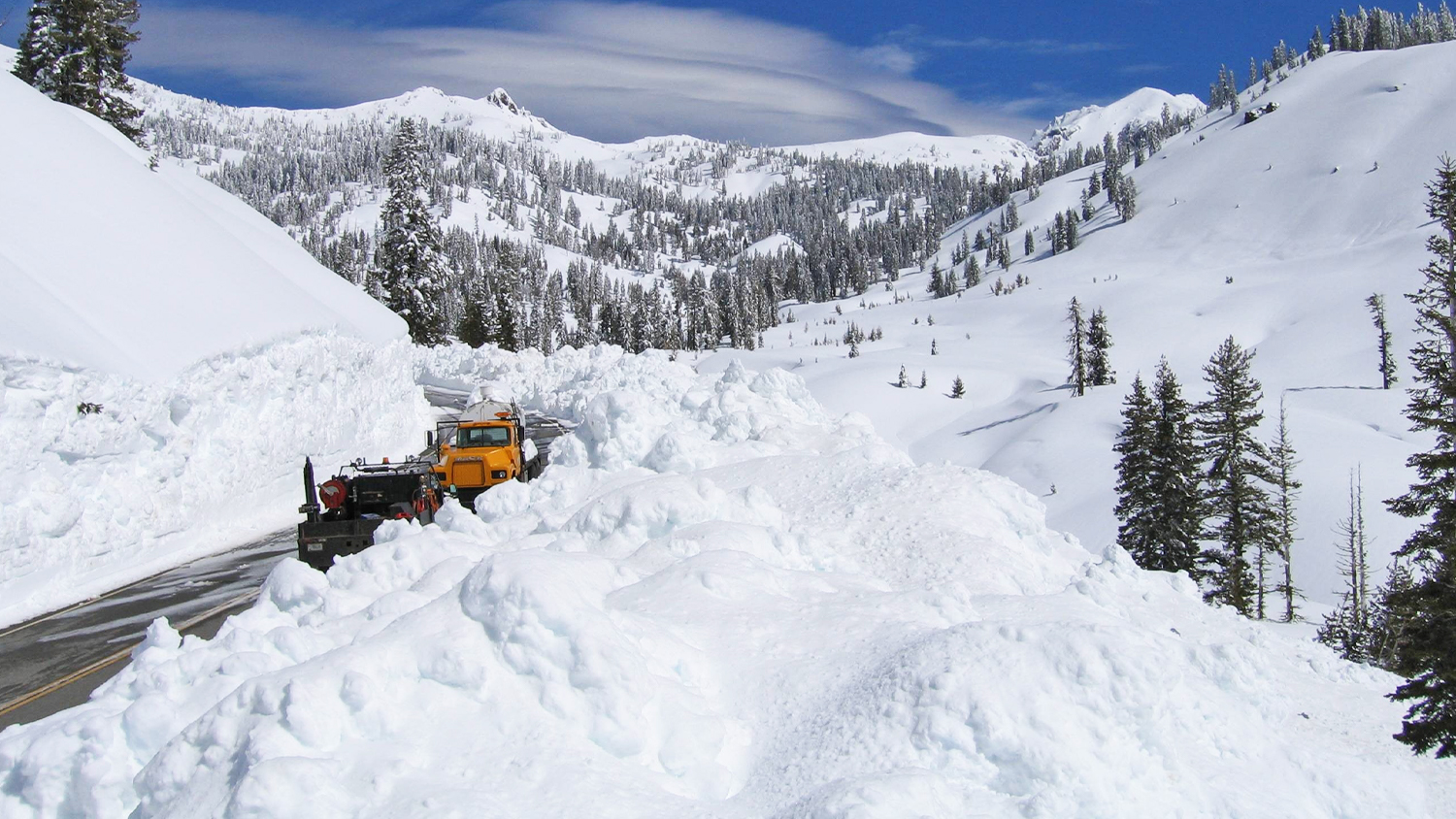 A three-story building is about 40 feet high. That’s how much snow can fall and cover Route 89, the main highway that runs through Lassen Volcanic National Park (LAVO) in Northern California. The park, which lies about 50 miles east of Redding near the northern edge of the Sacramento Valley, gets snow as early as September and as late as March.

When spring comes, a field crew has to find—and clear—Route 89. The highway includes 13 miles of road above the tree line, the altitude above which trees stop growing. Up there, few clues indicate where Route 89 lies beneath the snow.

“A lot of our work relies on having faith in our GPS and GIS,” said Welch.

The consequences of not finding the road range in severity. Best case scenario, if crew members are a few inches off, they might have to move some more snow, adding extra labor and a bit more to fuel costs. Worst case scenario, however, exposes the crew and equipment to life-threatening hazards. Several years ago, one employee was fatally injured when his bulldozer went over the edge of the mountain and the blade hit an obscured boulder.

Most road-clearing mistakes in LAVO do end in inconveniences rather than casualties, but that doesn’t make them easy to deal with. Getting back up on the road after veering off takes time and resources.

“When your blade tips over the mountain, it’s like riding in a slow avalanche,” said Welch. “You’ve got to have nerves sometimes to do this work!”

To increase accuracy and improve safety, LAVO looked into replacing its legacy Global Navigation Satellite System (GNSS) receivers and use new ones to collect more precise data points along Route 89. The idea was to build a new system to generate a highly accurate map of the road and provide the winter crew with safer and more reliable navigation.

Using ArcGIS Collector, a rugged Samsung tablet, and Arrow Gold® GNSS receivers from Esri partner Eos Positioning Systems, the road’s edges were remapped in the spring. This new map was then used at the end of winter to provide precise guidance to bulldozers equipped with plowing blades.

To help the bulldozers navigate, LAVO needed the map data to be accurate to within one foot. This required positional data errors to be corrected immediately. Under normal circumstances, a GNSS base station, which has a fixed location, would provide real-time differential corrections to GNSS field devices via a cellular connection. However, there was no cell coverage in the area where LAVO needed to map and plow the road.

The park was going to have to innovate and do this by other means—using its existing park radio system to transmit not just voice communications but also data.

“When your blade tips over the mountain, it’s like riding in a slow avalanche,” said Welch. “You’ve got to have nerves sometimes to do this work!”

In the past, the LAVO plowing crew used older-generation GPS receivers to locate Route 89. The devices were only using a single GNSS constellation, the US GPS constellation.

LAVO chose the Arrow Gold® GNSS receiver because, in addition to being able to utilize all four global GNSS constellations, it was compact, easy to use, designed for mapping and navigation apps, and rugged enough to be installed in LAVO’s snowplows. To save on cost, the park kept its existing GNSS base station installed at LAVO’s Fire Dispatch building.

With this configuration, the park would be able to provide the snowplows with centimeter-level differential corrections via the park’s radio system.

Radios are critical infrastructure at national parks, where cell service is often spotty. They provide a reliable and affordable means of transmitting voice communication and, potentially, data.

Because the radio system at LAVO had been designed for voice transmission only, it had to be modified to also transmit data from the GNSS base station to the Eos receivers in the bulldozers.

To accomplish this, the Department of the Interior (DOI) and National Park Service (NPS) staff approached Australian radio manufacturer GME, a government-approved contractor that designs P25-compliant data radios. DOI Radio Lab manager Patrick Foster worked with GME for about a year to design and ultimately provide a P25-compliant data radio, the GME CM60-V25D, that transmitted not just voice but also GNSS corrections in the RTCM 3.x open-source format. This was a huge breakthrough.

“Being able to offer differential corrections and pass nonproprietary data through these radios, on an existing park radio system, is really a big deal,” Foster said. “It is a lot of data that has to go through a small pipe, unadulterated. This is the kind of work that pushes our government to stay ahead of the curve.”

LAVO deployed the new solution in September 2018—just in time to map Route 89 before the first snow.

To set up the system, the legacy GNSS base station, along with one of the new GME radios, was installed at LAVO’s Fire Dispatch building. This location provided the best unobstructed view of the sky, regular access to power, and the optimal radio broadcast position.

Due to concerns about the amount of data being pushed through the radio system’s small data pipe, the GNSS base station was initially configured to transmit corrections for just the GPS satellites at five-second intervals. However, after initial testing, it was determined that this would not provide the required subfoot precision in LAVO’s work environment. So the base station was reconfigured to transmit corrections for both the GPS and GLONASS constellations, which would add more available satellites to the roving receivers. In addition, the output interval was set to two seconds to provide correctional information more frequently.

After a second round of testing, the radio system successfully passed the information at the two-second rate and provided corrections at the positional accuracy required to support the park’s snowplow operations.

The next step was to create the map of the road’s edges. A team from NPS and DOI installed an Arrow Gold® receiver in a vehicle and mounted the antenna to an external range pole attached to the car. The car’s side mirror was adjusted to show the bottom of the pole, which enabled the team to ensure that the antenna stayed directly above the highway’s painted line while driving along the edge of the road.

To get the data points for the map, the team used ArcGIS Collector on a rugged Samsung Galaxy Tab Active2 tablet. A three-person crew then drove the car at about 5–10 miles per hour and used the app to map the side of the road as a line feature.

In less than two and a half hours, all 13 miles of highway—or 26 miles of road edge—above the tree line were mapped. The precision along the majority of the route was four centimeters or better. This was much more accurate than in the past and proved to be critical the following spring during snowplow operations.

The Result: The True Test

In March 2019, Welch led his team to clear Route 89, which was the true test of the technology.

The operation required that all navigation using Collector on the tablet be done in a disconnected environment, so the road edge data was preloaded into the tablets, which were installed in the first two bulldozers. Paired again with the Arrow Gold® GNSS receivers, this newly created navigation system provided the field crew with locations precise to a few centimeters.

The Arrow’s external antenna was installed on the center of the bulldozer’s roof. The suggested track line for the dozer—a dotted line on the Collector map—was created with a 6.5-foot offset from the mapped road edges, since the dozer blade is 13 feet wide. To stay on the road, all the operator had to do was drive along the dotted line.

In Collector, the operator could toggle between viewing an aerial base layer, which showed rocks, boulders, and drop-offs, or a plain white polygon base layer. The white background provided the operator with a very simple map view of the road edges and the suggested dotted track lines that were easy to follow.

“We zoom in pretty close to the line when we’re doing the bulldozing,” Welch said.

Even though the 2019 winter season was particularly harsh, the results from plowing operations were outstanding. For the first time, there were no incidents of bulldozers going off the road and having to maneuver back up.

“When we were clearing the road…our visibility was zero,” Welch said. “We were just staring at the GPS, not even knowing where we were. You had to have faith in the maps.”

For the first time, the field crew truly did.

Based on this success at Lassen Volcanic National Park, NPS is looking at similar rollouts for other park plowing operations done in dangerous conditions.

Glacier National Park in Montana is considering using the same system to replace an old copper wire system under its roads that has deteriorated and shifted over time. Rocky Mountain National Park in Colorado is looking into using this to take the place of a series of 30-foot-high wooden poles that line Trail Ridge Road, one of the highest paved roads in North America. The poles help crews find the road, but with a navigation system like this one, the park is anticipating being able to remove the poles and restore the natural scenic view of the park.

View the original article in ArcNews 2020 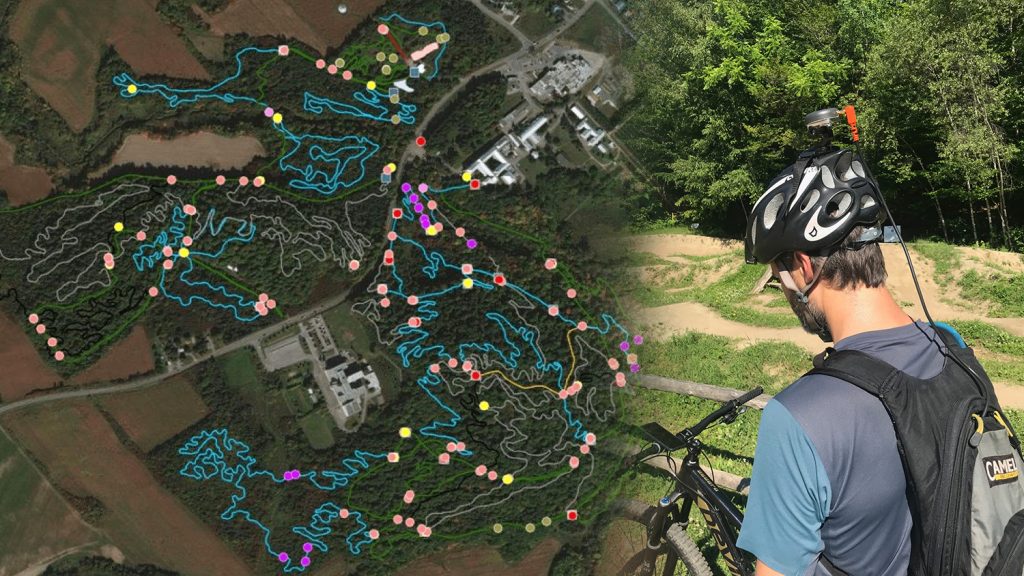 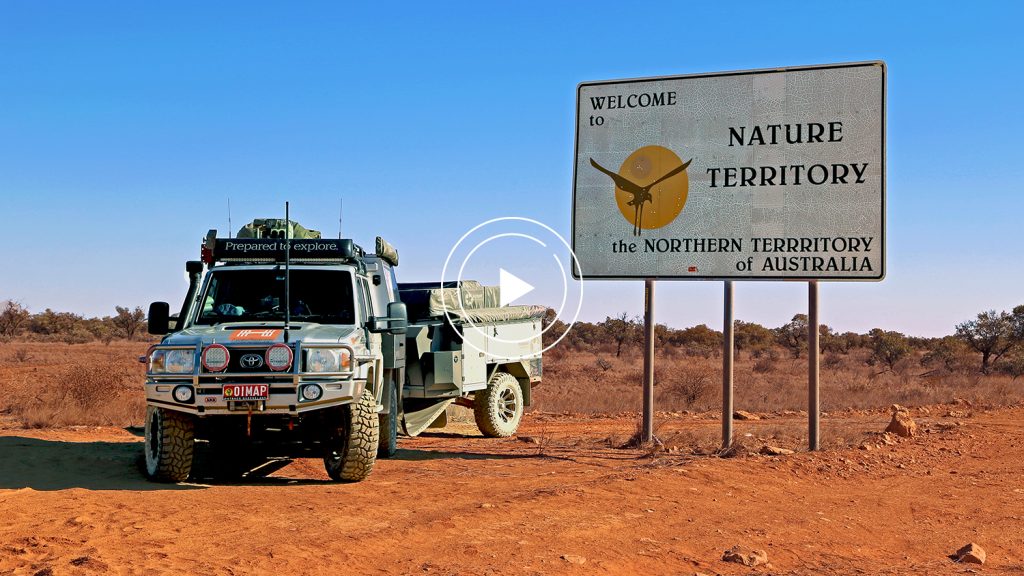 In this Esri Australia Webinar, discover the field data collection workflow Hema Maps uses to create digital and print maps with Arrow 100 and the Australia SBAS.