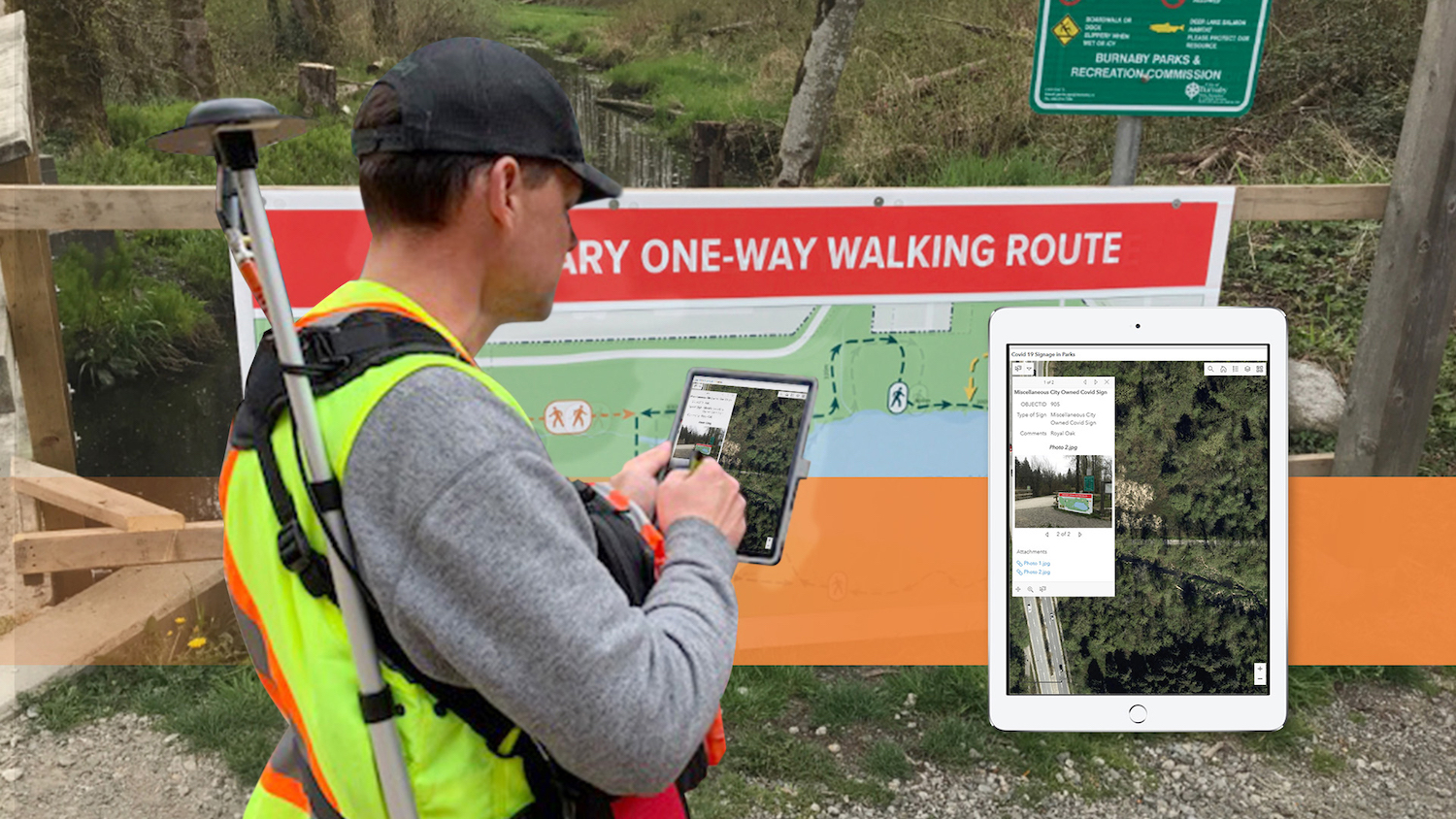 Fifteen minutes southeast of Vancouver, Canada, the suburban City of Burnaby is known for its rich trail systems and forested conservation areas. In a city of over 235,000, Burnaby has over 160 parks and trail systems.

“We have great trails,” Asset Management and GIS Specialist Rob Wilson said. “After the coronavirus hit, our usage of the parks and trails have gone way up.”

The City’s Assistant Director of Parks Operations, Steve Bruneau, consulted with the Parks GIS team to map over 1,250 social-distancing signs within a meter of accuracy for the City’s parks and trails assets.

Mapping the sign locations would be useful for a couple reasons. First, the parks and trails team needed to keep track of where signs had been installed, on which trail they were needed, and whether any park goers had vandalized them (initiating a replacement). The second reason is that, once the pandemic guidelines are relaxed, the parks and trails team will be equipped to comprehensively navigate to change or take them down.

“Once the provincial guidelines are lifted, we’ll have the GPS locations to remove them,” Wilson said. “With the combination of the Arrow Gold and Esri’s Collector we can send staff to navigate with each one of them.”

The solution: Transition existing software and hardware to the COVID-19 sign project

Wilson and his teammate, GIS Technician Ruby Tam, had recently deployed an upgraded data collection solution to their field workers. When the request came to collect the social-distancing signs, Tam quickly set up a new map for Esri’s ArcGIS Collector. Tam designed the schema in ArcGIS Pro, published it to ArcGIS Online and used Esri’s Web App Builder technology to create the Collector map.” They tested the map with an iPad® Pro on the narrow trails at Deer Lake, which had been converted to a one-way loop during the pandemic.

Back at the office, they then tweaked the schema to optimize it for collecting the COVID-19 signs.

“It only took about five or six hours for the map to be perfectly configured for the project,” Tam said.

Additionally, Tam set up a dashboard using ArcGIS Dashboards to better visualize the locations and types of signs installed. Later, this dashboard was also consumed by the City of Burnaby COVID Resource Hub.

The last component of the field solution was the use of their Arrow Gold GNSS receivers. About two years earlier, Wilson had transitioned from legacy GPS receivers to the Eos GNSS receivers because of the Arrow Gold’s increased performance under canopy.

“When we tried to map polygons with the older receivers, positions would always jump way off,” Wilson said. “But with the Arrow Gold, we find that not only are they good for RTK in clear-sky conditions, but they also perform very well under canopy to map our points, lines and polygons. We have been very successful in capturing our trail system in these challenging conditions.”

Rolling out the solution was then simple. Two field workers who had already been devoting their time to collecting park furniture, horticulture, playgrounds, storage units, trail systems, lights, and other features were given access to Tam’s new Collector map for the COVID-19 signs.

All told, in about a day, Wilson and Tam had converted the parks operations team’s hardware, software, and human resources to map COVID-19 guideline signs.

Every afternoon, the field workers and Wilson received an email with the quadrants in which the City’s maintenance crews had installed or updated social-distancing signs. This helped the data-collectors determine where to map or update signs on the next day. In the map that Tam created, they captured not only the signs’ locations, but also their type along with photographs. Wilson and Tam could monitor the workers’ progress in real-time on the dashboard.

“In less than a half-hour, I could see about twenty signs being added in real-time on our Esri dashboard,” Wilson said with satisfaction.

Data collection began on April 2, 2020 and after about two weeks, all 1,250 of the installed signs had already been collected with an average accuracy of 20-55 centimeters.

The last component of the field solution was the use of their Arrow Gold GNSS receivers. About two years earlier, Wilson had transitioned from legacy GPS receivers to the Eos GNSS receivers because of the Arrow Gold’s increased performance under canopy.

This story was original published on the ArcGIS Blog. View the original story here. 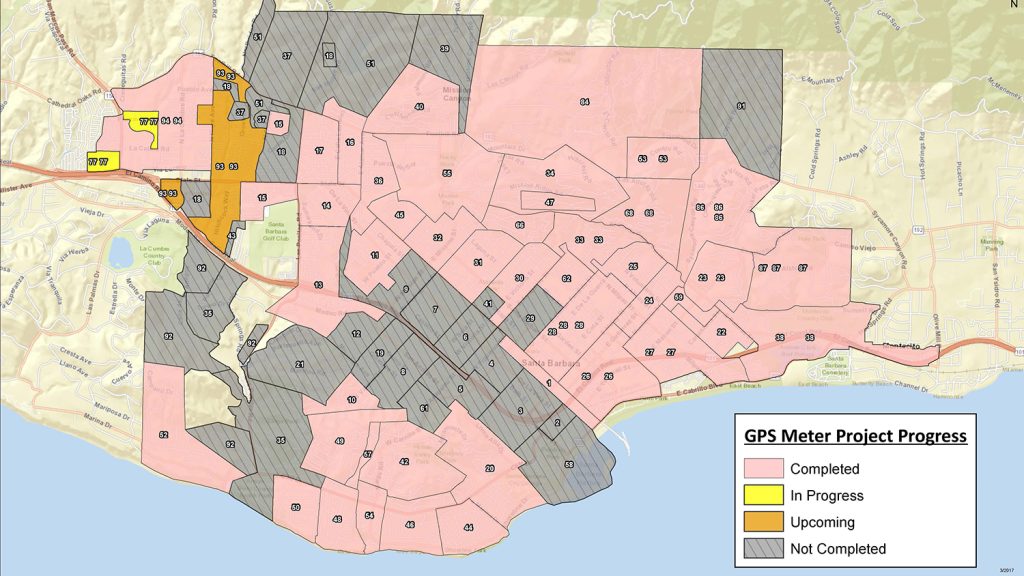 City of Santa Barbara is using an Arrow Gold® Base Station to map meters with centimeter accuracy, as city staff replace assets to respond to drought. 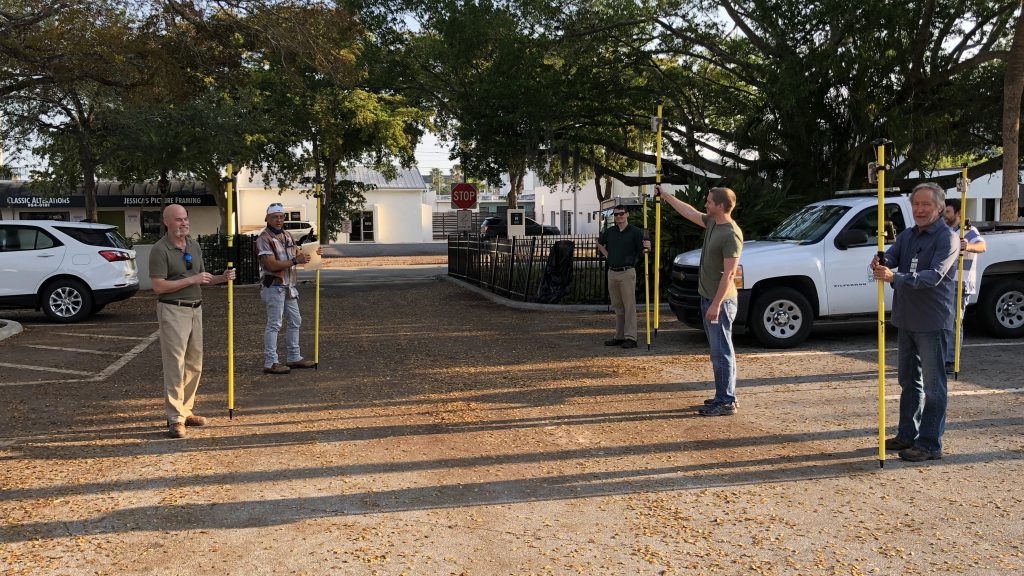 When some City of Sarasota employees were temporarily idled by the COVID-19 shutdown, the city found an innovative way to transition them to high-accuracy GIS field work by renting 14 Arrow 100® GNSS receivers.